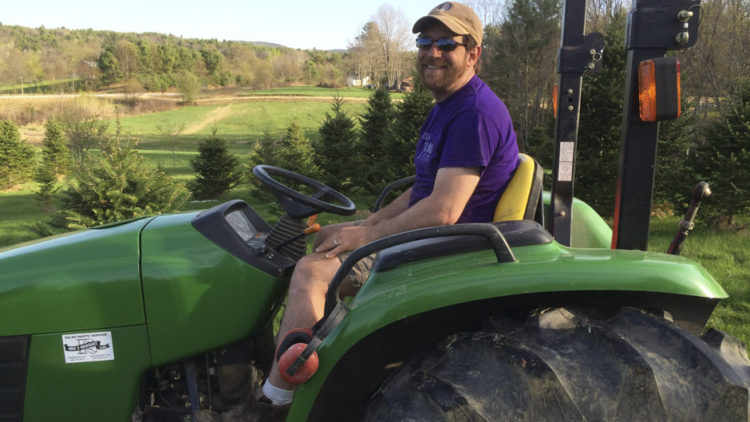 Tim Gaudreau is an accomplished, well-travelled, award-winning eco-artist and farmer with skills that range from photography, sculpture, and performance art to construction, tractor repair, web site development, home wiring, guitar building, engaging communities and kids in environmental issues, and creative vegetarian cooking with a flair for spices and a disdain for recipes.

Tim’s first experience as a farmer of scale came when he established an organic CSA from his backyard in Portsmouth.   Every week of the selling season, Tim’s ten CSA members received a box of vegetables supplemented with berries, fruit, honey, or fresh eggs. Running the CSA over the years gave Tim a crash course in farming as he strived to produce for his customers through droughts, overly abundant rain, and onslaughts from flying, slimy, and/or furry pests. In each case, Tim researched and customized creative solutions to minimize the damage to his harvest.

When Tim started to search for property on which to build an off the grid house for his family, he discovered a listing for an organic cut-your-own Christmas tree farm in Barnstead. He immediately fell in love with the property and the possibilities for the land. He was also impressed and inspired by the former owners, whose steadfast commitment to organic growing, land stewardship, and sustainable living mirrored his own.

The purchase agreement included a year of mentoring from the farm’s former owners. Over the course of the year Tim learned how to manage the farm through the seasons, maintain and repair the equipment, and plan over ten years in advance to build for the farm’s future. He also found himself enjoying many late night conversations with his mentors by the camp fire through which he formed rich friendships and an unedited sounding board that have extended well beyond the first year.

The invaluable guidance Tim received from Rich and Karlene fueled Tim’s desire to pay it forward in some way. Tim was all too aware of the challenges facing beginning organic farmers today — including the risks and burden of taking on overwhelming debt to get up and running, the lack of interest among farmers’ kids to continue the family business, and the resulting diminished availability of local, organically grown, unprocessed foods.

So when the ramshackle 1840’s farmhouse and 76 acres of overgrown former farmland across the street from the Christmas tree farm (which Tim had been eyeing for some time) came up for sale, Tim was ecstatic. The property presented the perfect opportunity to combine under one roof Tim’s passions for art, farming, and community building. As such, Tim’s vision for Willow Brook Farm and Arts Center came into focus and he dreamed of using the property to incubate and launch beginning farmers, offer residencies for artists, provide workshops and programs to educate and engage the community, and grow a grassroots movement to make sustainable living available to all.

With this in mind, Tim did what he does best: he took action to make his dreams become reality. He made a plan, ran the numbers, submitted an offer, worked with a lawyer to create the nonprofit, refurbished and wired the house (which was no small feat), cleared a patch of land for fields, formed the Board of Directors, recruited the farm fellows, and Phase I of Willow Brook Farm & Art Center was off and running.

Read Sarah Brown’s interview of Tim talking about the founding of Willow Brook Farm
For examples of Tim’s artwork, go to www.timgaudreau.com