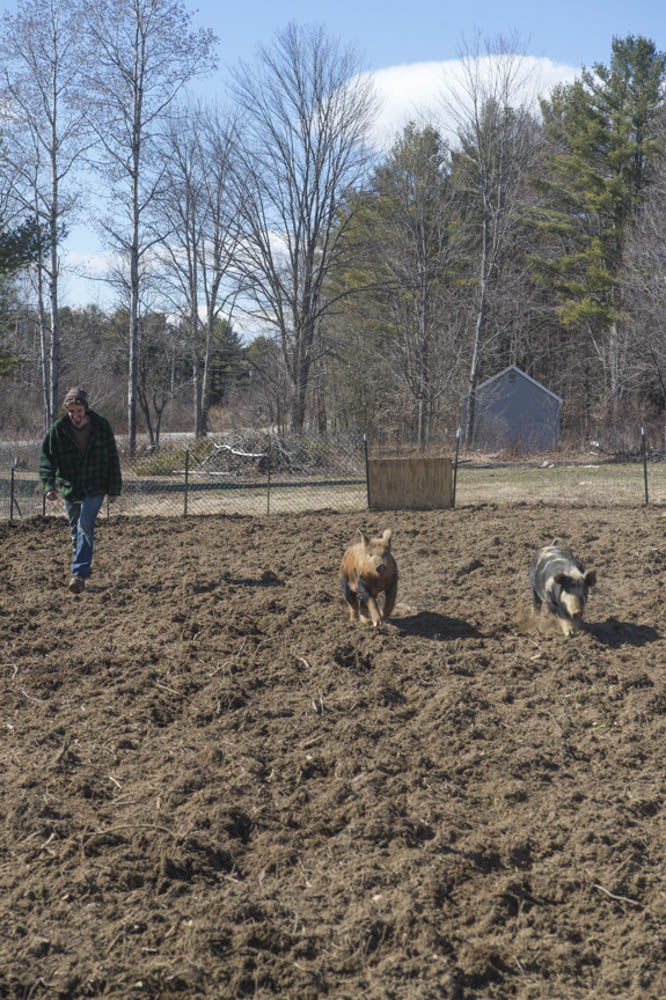 The weather has finally allowed us to break ground in the new garden space.  Last summer, Tim planted a cover crop of daikon radish to help condition the soil. We’ve been told that this same ground last year was knee high in woody shrubs, so we know we’re in for some hard work. We choose this side of the farm rather than the other open area next to the existing garden because it happens to be a much bigger area than the other.  We put the pigs here in early march to help work and turnover the soil. They have done a fantastic job and we have learned a few tricks to encourage them to root more. By feeding them less in the morning, they forage for food more through out the day. Smaller paddocks within the larger fenced in garden prompts them to focus on a smaller patch of land, digging it up more intensively. Through it all they looked really happy and in their element being able to munch on roots and brambles while passively tilling the new soil.

Overall the pigs did an enormous amount of work for us, but in the end there was still a significant number of root masses still locked into the soil not wanting to move. We ended up choosing to utilize the rototiller that was available for us and targeted only the 4 ½ ft by 40 ft garden beds and left the walkways alone to allow for some biological activity in the soil to remain, and hopefully return quickly. Rototilling helped tremendously, we now had light and workable soil and the broken up root masses that came out pretty easily. Though a lot of narly roots still remained for us to manually pull from the garden, gosh the size of some of the roots were almost as tall as me!